The keel goes on.

Today I tried the keel back on the hull after removing the styrene I referred to in my "First Try" post.  I was delighted with the fit, after finish painting and varnish the joint will be hardly perceptible. 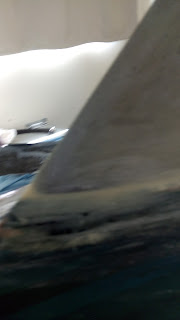 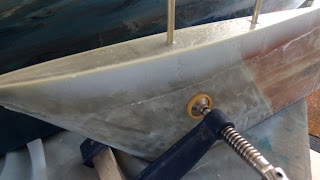 But just on the keel side of the joint the surface flared a little from the base keel surface.  So the second picture shows the whitish scraping of epoxy filler that I added to take out the flare.  There's the same effect on the other side.
Once that is sanded I can put on one more coat of epoxy over the whole keel, wet and dry sand it to fair, and finish it with black paint.  On the hull just above the keel joint I plan to paint the first inch black and then fade the black into the transparent finish of the main hull.

I,m thinking maybe I should make this into a build blog with flashbacks, so here's a couple of pictures from way back at the start in 2016. 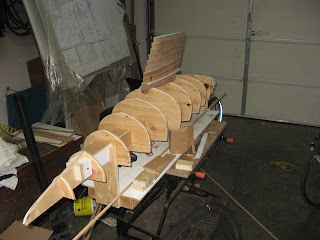 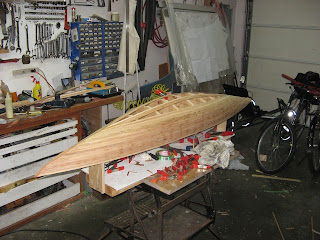 The first shows the initial assembly of the moulds on the frame.  This was following practice by Nick Schade, who has an excellent kayak building site.
Instead of the mould being referenced to a building board outside the hull, they are assembled on a 3 inch square aluminium tube running down the centre of the hull.  The idea is that then when the hull is complete, the deck can be assembled on top of the same moulds, then taken off and the moulds and strongback removed.  The centre three mould sections were made to fold about the vertical centre, to get them out from the tumblehome, and the rest of the moulds slid along the strongback to the centre to pull the whole lot out.  Go enjoy an hour on Nick's site to get this clear.  It's great fun and the music is really good.
Also in this picture is the cedar keel plug, bread and butter assembled in place on the hull.  Its lowest layer was built into the hull planking, the lead line being just above that, and then the rest was carved into an airfoil shape, cut so the front formed the plug for casting the lead, and the back fibreglassed back onto the finished lead to make the keel as in the top photos.
The final photo shows the cedar planking about 3/4 done.  The cedar planks were 9 mm by 3.5 mm, and their edges were moulded convex one side and concave the other as in standard cedar strip canoe practice.  Because that was the whole idea of this hull for me, that there would be almost no internal framing, just like a cedar strip kayak.  Right now the plan is to have just one single deck beam under the mast step, with a compression strut from the underside of that down to the keel.  I'm going to try to keep the rest of the hull completely clear, just mounts for the radio, servos, and battery.