But in a good cause, I am going to use the motor in a new model.  Probably a Fort Ship, if my current enthusiasm for that particular story continues.

I have used a cordless drill motor in a previous build, a springer for my grandson, The Bionicle Combat Tug.  He wanted a lot of power, and I had one knocking about so I put it in driving a 40 mm prop directly.  It certainly overpowers the Springer, I have had to pull back the throttle setting on the transmitter to stop the thing nose-diving.  I'm not planning on changing anything on that boat, my grandson loves the excess power, but it does seem to be a bit of a battery hog, it ran down the 4.5 amp-hour lead acid in it in just a bit over an hour.

Anyway, over the weekend I was vaguely musing in the car as my wife drove us up to Courtenay, thinking that I had been very pleased with a previous Springer, using a smaller motor with a 2:1 belt reduction to the prop, again a 40 mm.  It has a very similar top speed to the bigger motor, after all it's the same hull, but seems to be less fussy and to have much more battery life.  Thinking back to when I got the cordless drill motor, by dismantling a thrift shop bargain, I realized that I have had my own old cordless drill languishing in storage for more than a year since it's batteries finally died.  These drills have an epicyclic gearbox in line with the motor which I have previously just discarded, but maybe it was worthy of a closer look.

So, the first photo shows the strip down.  In fact there are three epicyclic trains in the old drill, two to provide two speeds, 0-600 rpm for screwdriving, and 0-2000 rpm for drilling etc.  Then a third epicyclic train provides the mechanics for the torque control and the hammer drill effect.  It's a lot of gears.

As I pulled it all down, I found that in fact it becomes quite simple for my purpose.  The first train, closest to the motor, is the first reduction that provides the higher speed drive (0-2000 rpm)  and that's a 3.3 :1 ratio which should be ideal.  So the second photo shows the motor and gear housing with the first reduction planet carrier .  Inside the housing you can see the sun gear mounted on the motor shaft, and the ring gear around it.  The ring gear is fixed to the housing so the planet carrier is the output.  The quality is remarkable, if you look closely you can see that the planet gears each have their own roller bearing.

Now if I can work out how to connect the prop shaft to the gear on the other side of the planet carrier, (shows in the third photo), and then cut back the length of the gear housing on the motor so that everything will hold in place, including grease, I'll have it made.

Nothing in the gear train will then be designed to take thrust, so I shall need to ensure that the prop thrust definitely bears on the ends of the prop shaft, but that's normal. 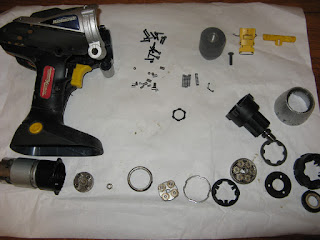 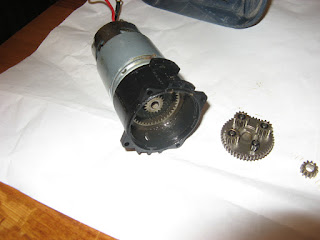 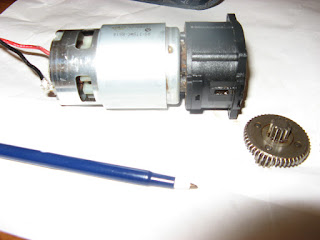 Edward.
Posted by Unknown at 15:23 No comments: 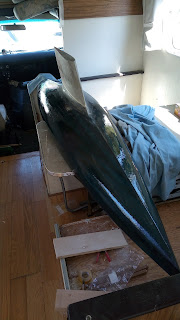 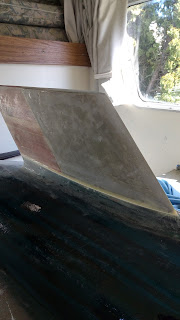 This is my first attempt to post an entry to the vmss website blog.  So it's really just a test.  But just to add interest, I'm going to try to add a picture of the work that I'm doing today on my "A" class.  I have been trying to fair in the demountable keel to the hull by putting a piece of waxed .020 in. styrene in the joint, adding epoxy filler to both sides, and then sanding back both the filler and the styrene to get a fair joint.  The styrene is intended to peel clean off the epoxy to allow the joint to split again, and then both sides should meet very closely when the keel is remounted. That is 40 lbs of lead on the front of the keel.

Edward.
Posted by Unknown at 11:51 No comments: